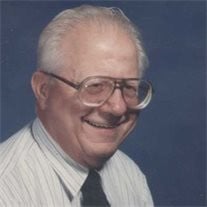 SCHENECTADY – Alfred J. Derenske, Sr., 87, of Avenue B, went home to his Lord and entered eternal rest on Friday, August 10, 2012 at the Ellis Residential Center after a long and courageous battle with Parkinson's Disease. Al was born in Amsterdam, NY, a son of the late Edward & Anna Dulczewski Derenske. He was a 1943 graduate of Wilbur H. Lynch High School. Following graduation, he was inducted into the Army and served 3-1/2 years in the 37th Division in Bouganville, Guadalcanal and Manila areas of the South Pacific as a medical corpsman. He received the Bronze Star for action at Manila, Philippine Islands while serving this country that he loved so well. After honorably serving his Country, Al attended and graduated from Clarkson College of Technology with a Bachelor Degree in Business Administration in 1949. He was employed at the former ALCO Products in both the Schenectady and Dunkirk, NY plants for ten years until the company ceased operations. Al changed careers and attended the State University of New York at Albany where he earned a Masters Degree in Education. He began his teaching career at the Farnsworth Middle School in the Guilderland Central School District, and taught there for 27 years until retiring in 1989. Al was a dedicated communicant of St. Anthony's Church and a member of the Holy Name Society. He was a man of Christian values; a faithful husband; a dedicated father; a terrific grandfather and a fantastic teacher. He always loved to make people laugh with his one-liners and continued to do so right to the end. Al was an avid fisherman and hunter. He loved to fish for trout and for the big muskies in Chautauqua Lake, and for the salmon he brought home from Lake Ontario. He was a member of the Ridge Runners hunting club for many years; and whether he brought home a deer or not, he just loved the hunt. Wintertime he could be found ice-fishing on Lake George. Al was predeceased by his siblings, brother Edward F. Derenske and sister Leona Vecchio. He is survived by his beloved wife of 58 years, Philomena (Phyllis) DeMatteo Derenske, who he met while working at ALCO Products and married on May 16, 1954 – a true office romance; loving children, Christine Knutti and her husband Ronald of Schenectady, and Alfred J. Derenske, Jr. and his wife Beverly of Norfolk, VA; and adoring grandsons Daniel Alfred Derenske and David Ryan Derenske. Al was a happy man, fun to be around, and a passionately dedicated to his children and grandchildren. He will be sadly missed by anyone who knew him. Services will be held Tuesday, August 14th from the Rossi & Ditoro Funeral Home at Union & North Jay Streets in Schenectady, then proceeding to St. Anthony Church, 331 Seward Place in Schenectady, where Al was a Parishioner for over fifty years. A Mass will be celebrated at 11 AM. Interment will follow in St. Anthony Cemetery in Glenville, NY. Relatives and friends are invited to call at the Rossi & Ditoro Funeral Home at Union & North Jay Streets in Schenectady on Monday, August 13th from 4 PM to 8 PM. In lieu of flowers, memorial contributions may be made to the Rosa Venerini Early Childhood Center, 1840 Van Vranken Avenue, Schenectady, NY 12308; or St. Anthony Church, 331 Seward Place, Schenectady, NY 12305. The family's heartfelt thanks and gratitude are graciously extended to Dr. Richard B. Toll for his caring and concern for Al for many years; to Father Richard Carlino for his always consoling words and visits; to Sr. Maria Rosa for her weekly visits that Al looked forward to and greatly enjoyed; and to everyone – on every shift – at the Ellis Residential Center Stockade Wing for the genuine love, care and devotion that was given to Al during his 16 months of residence there. For additional information and for directions, please visit www.rossiditorofuneralhome.com.

SCHENECTADY &#8211; Alfred J. Derenske, Sr., 87, of Avenue B, went home to his Lord and entered eternal rest on Friday, August 10, 2012 at the Ellis Residential Center after a long and courageous battle with Parkinson's Disease. Al was born... View Obituary & Service Information

The family of Alfred J. Derenske, Sr. created this Life Tributes page to make it easy to share your memories.

Send flowers to the Derenske, family.