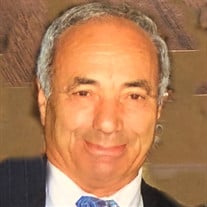 SCHENECTADY – Alberto Biasiucci, 81, entered peacefully into eternal life on Sunday at Ellis, surrounded by his loving and devoted family. Alberto was born in Dragoni, province of Caserta, Italy on March 31, 1938 the son of the late Angelo and Teresa Morelli Biasiucci. He served in the Italian Army and was a self-employed painter. He immigrated to the United States in June of 1974, settling his family in Schenectady. Alberto worked at Ellis Hospital retiring after 30 years of service. He enjoyed music and had an extensive collection of vinyl records. Alberto tended to his plentiful garden and was a master winemaker, he took immense pleasure and pride in sharing his talents and treasures with family and friends. Above all else, Alberto was most proud of his Italian heritage, his family, their accomplishments, and the love they all shared. He was a member of the Gabriele D’Annunzio Sons of Italy Lodge, #321 and a faithful communicant of St. Anthony’s Church. The family is grateful to the staff on C1 at Ellis Hospital for their exemplary care and compassion. Alberto is survived by his beloved wife of 58 years Giuseppina Zullo Biasiucci, whom he married on June 15, 1961; loving children, Angelo (AnnaMaria) Biasiucci, Adriana (Todd Meyer) Biasiucci and Roberto Biasiucci, adoring grandchildren, Salvatore (Carolyn) Fraioli, Luciano ( fiancée Katie Schults) Fraioli, Veronica Fraioli, Christina ( fiancé Ross Hicks) Biasiucci, Alberto Biasiucci and Rylee Biasiucci; loving siblings, Angelina Biasiucci, the late, Maria, Pasquale, Giuseppe, and Raffelina Biasiucci; loving brother-in-law to Anna Musco, Franco D’Ascia, and Carmela (Luigi) Gazzillo; nephews, Clement and Ralph Gazzillo; many special nieces and nephews in Italy also survive. Services will be held on Friday at 9 am from the Rossi & Ditoro Funeral Home, 501 Union St., followed by a Mass of Christian Burial at 10 am at St. Anthony’s Church, Seward Place. Interment will follow in St. Anthony’s Cemetery, Glenville. Relatives and friends are invited to call at the Rossi & Ditoro Funeral Home on Thursday from 4 to 7 pm. Memorial contributions may be made in Alberto’s memory to The American Kidney Fund, at www.americankidneyfund.org or in care of the funeral home.

SCHENECTADY &#8211; Alberto Biasiucci, 81, entered peacefully into eternal life on Sunday at Ellis, surrounded by his loving and devoted family. Alberto was born in Dragoni, province of Caserta, Italy on March 31, 1938 the son of the late... View Obituary & Service Information

The family of Alberto Biasiucci created this Life Tributes page to make it easy to share your memories.

Send flowers to the Biasiucci family.