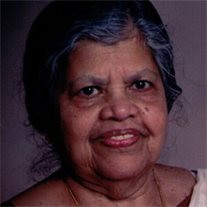 Achamma Thomas was born on December 14, 1930 into the Thykkadavil family in Thiruvalla, Kerala in India to Late Mr. T.K. Kuruvilla and Late Mrs. Annamma Kuruvilla. After her graduate studies she specialized as an educationist and worked as a mathematics teacher in Kerala for several years. The students she taught have fond memories of her. She got married in May 1966. Her husband Very Reverend Thomas P Mundukuzhy Cor-Episcopa of blessed memory was one of the most active and dedicated priests of Malankara Orthodox Church, who was the founder vicar of several parishes including St. Paul's Indian Orthodox Church, Albany, NY which is a parish community under the Northeast American Diocese of the Malankara Orthodox Church of India. She migrated to the US to join her clergy husband in February 1969. They lived in Syracuse, NY for many years where she raised her 4 children. In Syracuse, she helped her husband start the St. Thomas Indian Orthodox parish. In 2001 they moved to Guilderland near Albany to live with their son Anil. Mrs. Thomas was preceded in death by her siblings Adv. Kurien Thykkadavil, Prof. K. Joshua, Mrs. Thankamma George (Callumpurathu Poovathur, Mavelikkara), Mrs. Mary Mathew (Poothiyottu, Mepral) and Ms. T.K. Aleyamma (Thykkadavil, Thiruvalla). She is survived by her sister Mrs. Annamma Kuriakose (Vellakkottu,Kottayam). Also, Mrs. Thomas is survived by her children Vinu Thomas, Anil Thomas and his wife Bindu, Mohan Thomas and his wife Amy, and Anne Mathew and her husband Robin; and grandchildren Andrew Kuruvilla Thomas, Angeli Mary Thomas, Aaron Philipose Mathew, Jasmine Susan Thomas, and Sophia Sarah Mathew; and many other family and community members who held her dear, and whom she also held dear. Kochamma, as Mrs. Thomas was affectionately called, was a loving, simple and prayerful woman who was a great pillar of support for her late husband who passed away in March 2007. She has been a silent source of inspiration and strength for all those who knew her, a fortress of faith and hope for the St. Paul's parishioners and many others in the community. Her angelic smile and quiet presence was a source of calming influence to all. Not one to voice her discomfort and pains usually, she chose to remain positive when her ailments were tiring her in her last days and by doing so, she challenged others to be like her. She drew strength from her deep Orthodox faith. She was a model "Beskyomo" [Daughter of the Covenant – referring to the wife of a priest in the Malankara Orthodox tradition]. She preferred to remain always away from the limelight, yet was among the first to kick start the campaign to have our own church. Even when she received her last Holy Qurbana on earth last Sunday, she insisted on walking towards the Holy Qurbana rather than have it brought to her, despite her ailments. Kochamma would be dearly missed by everyone who has ever had the privilege to interact with her. Farewell Kochamma from all of us, till the day we hope in Christ to meet you again on that beautiful shore beyond all pain, where the will of God reigns supreme.

Achamma Thomas was born on December 14, 1930 into the Thykkadavil family in Thiruvalla, Kerala in India to Late Mr. T.K. Kuruvilla and Late Mrs. Annamma Kuruvilla. After her graduate studies she specialized as an educationist and worked as a... View Obituary & Service Information

The family of Achamma Kuruvilla Thomas created this Life Tributes page to make it easy to share your memories.

Send flowers to the Thomas family.