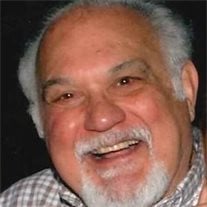 GUILDERLAND – A. Richard Martinelli, 81, entered peacefully into eternal rest on Tuesday, August 18, 2015 at Ellis Hospital after a brief illness, surrounded by his loving family. Richard was born in Schenectady on February 5, 1934 a son of immigrant parents, Aurelio and Assunta Gemi Martinelli. He graduated from the former Nott Terrace High School in 1951 and began his long and illustrious career with the General Electric Company. He attended Clarkson University under a work study with the General Electric, receiving a BS degree in mechanical engineering. While at Clarkson, he participated with the ROTC program and enlisted in the US Army upon graduation. He spent 3 years in Germany in the 24th Engineer Division. His propensity for language enabled him to speak Italian and German. Richard traveled locally and internationally, with the General Electric large steam turbine program, selecting, purchasing and overseeing their installation. After his retirement in 1995, he started a consulting business, ARM Technical Services. He was a member of the Society of Engineers and the Elfun Society, volunteering many hours to the modification of electronic toys, which enabled children with disabilities to experience countless hours of education and joy. Richard loved to travel, and was an avid golfer and bowler. Above all of his accolades, family and friends were most important to Richard. He was a colorful storyteller and loved to make people laugh. The Martinelli family is deeply grateful to the staff on E-2 at Ellis Hospital, for their kind and compassionate care. Richard is survived by his beloved wife of 18 years, Mary Travis Martinelli, whom he married on September 29, 1996; his loving children, Carol Martinelli-Sharma and her husband Anurag, of Clifton Park, Geoffrey Travis (Lori Decker), of Schroon Lake and Jennifer Travis (James 'Si' Johnston), of Colonie, devoted brother, Gino Martinelli and his wife Judy, of Schenectady; grandchildren, Peter, Gregory and Steven Sharma, Alyssa and Mackenzie Travis; his special buddy and friend Tommy Plucknette; many dear, nieces, nephews, cousins and friends also survive. Services will be held on Monday at 9 am from the Rossi & Ditoro Funeral, 501 Union Street and then to St. John the Evangelist Church, Union Street, where a Mass will be celebrated at 10 am. Interment will follow in St. Anthony's Cemetery, Glenville. Relatives and friends are invited and may call at the Rossi & Ditoro Funeral Home on Sunday from 3 to 6 pm. Memorial contributions may be made in Richard's memory to the Foundation for Ellis Medicine, 1101 Nott Street, Schenectady, NY 12308.

GUILDERLAND &#8211; A. Richard Martinelli, 81, entered peacefully into eternal rest on Tuesday, August 18, 2015 at Ellis Hospital after a brief illness, surrounded by his loving family. Richard was born in Schenectady on February 5, 1934 a... View Obituary & Service Information

The family of A. Richard Martinelli created this Life Tributes page to make it easy to share your memories.

Send flowers to the Martinelli family.